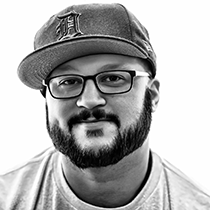 From an angry and explosive teen to an Award Winning Keynote Speaker, Gabriel has learned that it is how we reflect on our past experiences that defines who we are and how we view the world around us. After barely graduating from high school, Gabriel enlisted in the US Army, seeking a fresh start and hoping to find some self-discipline and a new direction in life.

Seven months into his enlistment, while stationed overseas in Germany, Gabriel was diagnosed with stage 3B testicular cancer. He underwent heavy cycles of chemotherapy, several major surgeries and dozens of minor procedures during his three years in treatment at Walter Reed Army Medical Center, in Washington DC. Though he is now deemed cancer free, he lives with the knowledge that he has a 65% chance of the cancer returning, making every day he wakes up, one he is driven to capitalize upon. The days spent wondering whether he would live or die gave him a newfound perspective and appreciation for life.

A graduate of Western Michigan University in Film and Creative Writing, Gabriel now sees everything in life through a different lens. Though he never intended to share his past experiences on stage in front of strangers, Gabriel discovered that his words and his story of survival connected powerfully with other people and became a way for him to cope with and learn from his past experiences. He found that sharing his stories enabled others to explore and learn from their own.

Gabriel brings an amazing and rare perspective of the world, having lived in three countries and seven US States. His travels, combined with his reflection of cancer survival, military experience, and life experience have enabled him to write on topics with unique vulnerability not commonly explored or talked about by other speakers and performers. While in high school, Gabriel was voted “class bully” and “class poet” of his graduating class. These two battling sides of himself, gave him an interesting perspective of the world and an understanding about those who lash out and how they can find new coping methods that have worked effectively for him. Gabriel has discovered that by simply sharing his stories and speaking the truth he sees around him, others are inspired to share their own stories, making his presentations very real, honest, and accessible regardless of age, class, gender or nationality.