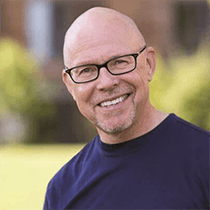 Stephen Cope is a best-selling author and scholar who specializes in the relationship between the Eastern contemplative traditions and Western depth psychology. Among his seminal works in this area are: Yoga and the Quest for the True Self, The Wisdom of Yoga, and The Great Work of Your Life. His most recent work, Deep Human Connection, is an examination of the psychology, neurobiology, and spirituality of deep human connection, and the imperatives of human attachment—an issue of great importance to both the Eastern and Western traditions.

For almost thirty years, Stephen has been Scholar-in-Residence at the renowned Kripalu Center—the largest center for the study and practice of yoga in the Western world. Kripalu hosts almost 50,000 guests a year in its many yoga, meditation, and personal growth programs. It is located on a sprawling 200 acre estate in Stockbridge, Massachusetts. In addition to his role as Scholar-in-Residence, Stephen is the founder
and former director of the Kripalu Institute for Extraordinary Living—one of the world’s most influential research institutes examining the effects and mechanisms of yoga and meditation, with a team of researchers from Harvard Medical School, University of Connecticut, University of Pennsylvania, and many more.
Stephen is the recipient of both a Telly and an Apple award for his work. In its twenty-fifth anniversary edition, “Yoga Journal” named him one of the most influential thinkers, writers, and teachers on the current American yoga scene.